Behind a brilliant pitching performance from Luis Castillo, the Reds shut out the Cardinals 4-0 in game two of the series Saturday night. They go for the series win this afternoon at Busch Stadium. First pitch is set for 2:15 ET.

If the Reds win today, they will have won each of their last three series against the Cardinals. It’s quite impressive considering they started the season 0-9 against St. Louis.

The Reds have been disappointed with the inconsistency of some of the young pitchers this sesaon, but at least one pitcher can be written in for the starting rotation in 2019, barring any health issues. Anthony DeSclafani has been the most consistent pitcher on the team since he was activated from the disabled list in early June. He has had a few hiccups recently, giving up four earned runs in 6.2 innings and 6.0 innings in each of his two previous starts at the Brewers and the Cubs, respectively. However, he’s lowered his ERA to 4.34 and his xFIP even lower than that at 3.97. If he pitches well in September, I wouldn’t be surprised to see the ERA drop below four.

DeSclafani is still giving up home runs–18 in only 87.0 innings, a career high. But he’s limiting walks, which is helping him when he does give up the home run ball as less people are on base at the time.

Here are his numbers against St. Louis. I’m not sure there’s a Reds pitcher who can get Matt Carpenter out. 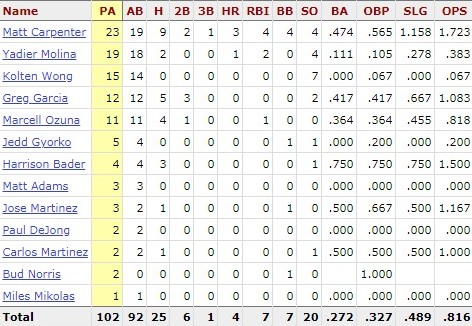 Luke Weaver, the Cardinals’ 2014 first round draft pick, is in his first full season in the major leagues. He’s faced the Reds twice this year, giving up only two runs and striking out seven in the first appearance and four runs on seven hits with five walks in five innings in the second appearance. His last three appearances for the Cardinals have been out of the bullpen, but he’s acquitted himself nicely down there, giving up only one run–a home run–and not walking a batter in four innings. Weaver is more of a ground ball pitcher, as 42.6% of his balls in play are grounders. He can also be a strikeout pitcher, having struck out 114 batters in 129.1 innings.

Here are his numbers against Reds batters: 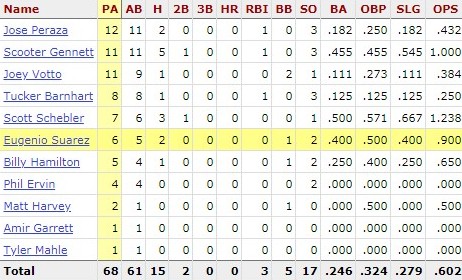 The lineups can be found here.

Tucker Barnhart is hot right now, and he went 2-for-4 with an RBI last night as well.

Jonathan India led off the night with a solo ? for @DragonsBaseball, his 2nd homer since being promoted. The 2018 1st round #MLBDraft pick has hit 5 home runs in 42 games across two @MiLB levels this season. Here's how @Reds prospects are faring tonight: https://t.co/ho3jdAS3Gv pic.twitter.com/HDSXKMDXeN

Aristides Aquino homered twice for Pensacola on Saturday night, and a few other notes from around the Cincinnati #Reds farm systemhttps://t.co/Ze5lZCjrD9 pic.twitter.com/5RJSxhayRj

I missed this yesterday, but this is an awesome gesture by Billy Hamilton.

Every @Reds trip to St. Louis gives @BillyHamilton a chance to reconnect with two of his biggest fans.#RedsCountry pic.twitter.com/H9VagEgW4Y