Matt Harvey pitched for the Reds tonight instead of Robert Stephenson, Cody Reed or Lucas Sims. If it’s the case that the Reds couldn’t attract a decent offer for Harvey before the trade deadline, it’s hard to see that prospect improving much, if at all. How long will the Reds keep giving valuable rotation opportunities to a guy who won’t be with the team next year?Ã‚Â

The Reds play the series finale tomorrow at 1:35 pm. Luis Castillo vs. Tanner Roark. Then they head to New York for a 3-game series with the Mets. While the Mets have a worse record than the Reds, they’re due to start Noah Syndergaard and Jacob deGrom in two of the games.Ã‚Â

Matt Harvey gave up five runs in four innings, a run each inning he worked, including the fifth inning when he didn’t record an out. In 4+ innings of work, he struck out one and walked two.Ã‚Â

Jesus Reyes made his major league debut in the 7th inning. He hit the first batter he faced with a 96-mph fastball. He recorded a double play and fly out to finish his first big-league inning. Reyes returned to pitch a 1-2-3 8th inning.

The Reds got solo home runs from Jose Peraza, who homered on the second pitch of the game, and Eugenio Suarez who hit a 4th-inning bomb, his 26th of the season, both were to left-center. Outfielder Mason Williams had two doubles and a single. The Reds drew one walk tonight.Ã‚Â Ã‚Â

Tucker Barnhart was thrown out of the game in the 5th inning after Matt Adams hit a home run off Matt Harvey. Barnhart appeared to be arguing previous balls-and-strikes with the home plate umpire. Curt Casali, who caught nine innings in the first game of the double header came in to sub for Barnhart. Barnhart was the second Reds player to be ejected from a game this season, with Joey Votto being the other. Casali’s OBP is .403.Ã‚Â

Futile Questions Why is Billy Hamilton starting every single game in centerfield? Are there no other players who the Reds would like to see play there to evaluate for the future? Hamilton is hitting .227/.301/.306 with a wRC+ of 66 (that’s 34 percent below league average).Ã‚Â

Lucas Sims First Louisville Start Lucas Sims, the headline return from the Braves in the recent Adam Duvall trade, pitched for AAA-Louisville tonight. He gave up one run in five innings, with no walks and six strikeout. Add Sims’ name to the list of pitchers who could use major league opportunity.Ã‚Â

The Guns of August Check out this list of all-time best on-base percentage for the month of August (courtesy of a screen grab by Nick Kirby). Williams, Ruth, Gehrig and Joey Votto.Ã‚Â 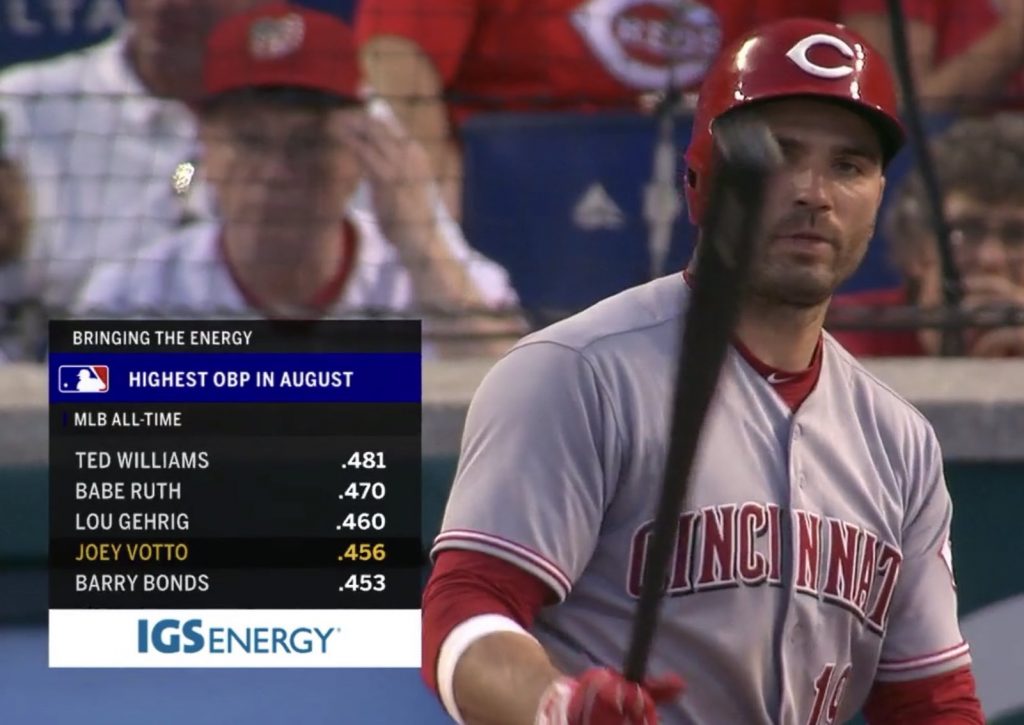