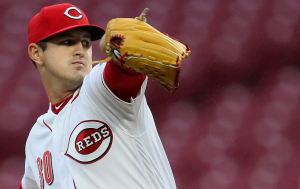 There is no indication of physical injury to Mahle. Riggleman said, as reported by Mark Sheldon of MLB.com:

“He’s really kind of toying with his delivery and where he’s standing on the rubber. He’s thinking about a lot of things. Just a couple of his quality pitches have gotten away from him. He’s going out there with just a fastball and not really locating that. There’s reason for concern.”

The word came mid-afternoon. Mahle was optioned to Class AAA Louisville, and righthander Jesus Reyes was recalled from the Bats to replace Mahle on the roster. It was clear this morning that something was up:

RHP Jesus Reyes was in the lobby of #Reds team hotel this morning. Either heÃ¢â‚¬â„¢s getting called up or thatÃ¢â‚¬â„¢s one heck of coincidence. Not sure on the corresponding move. They need bullpen help with Mella going 4 1/3 yesterday. Reyes was 1-0 with 1.35 ERA in four games at AAA

The six-man starting rotation is now reduced by one due to injury, leaving Homer Bailey, Anthony DeSclafani, Sal Romano, Luis Castillo and Matt Harvey as the starting quintet.

And from the when it rains, it pours column:

RHP Hunter Greene has been placed on Class A Dayton’s disabled list with a sprained ulnar collateral ligament in his right elbow and will not pitch again for Dayton this season. He will begin rehab in Goodyear immediately and will be evaluated throughout the offseason. #RedsMiLB pic.twitter.com/mr5ZIiApfc

Both DeSclafani and Michael Lorenzen were able to recover from similar injuries through rehab only, avoiding the dreaded you-know-who surgery. We can only hope and pray that the same is true for Greene and that he will be back on the hill sometime in 2019.

The Reds play game two of a four-game road set against the Washington Nationals tonight at 7:05 Eastern time at Nationals Park. The Reds hope to break a three-game losing streak that has come on the heels of three straight wins against the first-place Phillies. Speaking of losing streaks, the Reds have lost 12 straight to the Nats and 14 of the last 15 dating back to the 2016 season.

Like Mahle, DeSclafani is in the midst of a streak of subpar starts. In his last three starts, DeSclafani has pitched 12 innings and surrendered 12 earned runs. The streak almost identically mirrors MahleÃ¢â‚¬â„¢s in terms of when it started. Hopefully, DeSclafani can break the trend that Mahle continued in ThursdayÃ¢â‚¬â„¢s game.

Gonzalez is having some struggles of his own. HeÃ¢â‚¬â„¢s lost five consecutive decisions, though that is primarily due to lack of run support from his teammates. He got the win in the second game of the year against the Reds, a 6-5 Nationals victory. This lefthander is a guy you can pretty much count on a quality start from each time out. ItÃ¢â‚¬â„¢s another tough challenge for the Reds tonight.

All other members of the pen should be ready when called upon this evening.

This reflects the opinion of our Doug Gray, who expressed in a question-and-answer session here on Redleg Nation recently that the RedsÃ¢â‚¬â„¢ farm system is probably ranked somewhere between fifth and 10th best Ã¢â‚¬Â¦

As the only organization featuring three of the game’s top 20 prospects, @MLBPipeline tabs the Reds as having the 7th-best farm system in baseball. Ã¢Å¾Â¡Ã¯Â¸Â https://t.co/fkqvo82RZ8 #RedsMiLB pic.twitter.com/qVWP1IDkbO

Some of you may remember this game Ã¢â‚¬Â¦

There are big innings, and then there is this inning. pic.twitter.com/DxONBYiN5F