In the last game before the All-Star break, the Reds look to finish the unofficial first half of the season with a three game sweep of the Cardinals at Busch Stadium.Ã‚Â First pitch is at 2:15 ET.

Anthony DeSclafani’s been decent enough since he came back from the disabled list in early June, but his last outing was his best. Against the Cleveland Indians on July 9, he pitched seven innings of five hit, one run baseball. That one run came on a solo home run. He only struck out three, but was able to get batters out in other ways.

Like Luis Castillo, DeSclafani has also had issues with giving up the home run ball. He’s surrendered 10 home runs in 40.2 innings, and his HR/9 is at 2.21. However, he’s pitched at GABP for all but two of his starts, so that plays as a factor as well. Most important for DeSclafani though is to pitch every fifth day, stay healthy, and get himself back to the pitcher he was in 2016.

Matt Carpenter has the best numbers against DeSclafani, with eight hits in 17 at-bats, including two home runs. 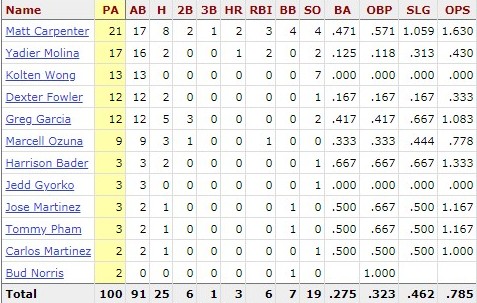 Miles Mikolas might just be the best comeback story of the year. After two years with the Padres and one with the Rangers (from which he was released), Mikolas went to Japan to pitch for the Yomiuri Giants, where he turned around his career. In 62 starts, he pitched to a 2.18 ERA. The Cardinals signed him in December 2017, and he’s been the best Cardinals pitcher this season. In 18 starts, Mikolas has a 2.65 ERA and a 3.21 FIP. His success stems from not giving up home runs and not walking people. He’s walked the same number of batters (18) and given up the same number of home runs (8) as he did when he was with the Texas Rangers in double the number of innings. He was deservedly named to the National League All-Star team, but will not pitch since he’s pitching today.

Mikolas is a ground ball pitcher–he induces about 50.4% of them–and uses his sinker and slider almost as much as his fastball to do so. His velocity ranges from upper 80s to mid-90s, so he relies on locating pitches well in order to have success.

The Reds have limited at-bats off Mikolas, but Tucker Barnhart does have a home run off him and Scooter Gennett is 2-for-6 against him. 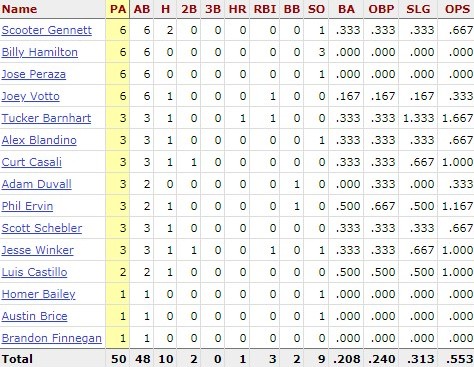 The lineups can be found here.

With multiple rain delays yesterday, both bullpens have been used more than the teams would have wanted to. The Reds look to be in better shape than the Cardinals though, as they only used five pitchers last night to St. Louis’ seven. However, with the All-Star break coming tomorrow, don’t be surprised if nearly everyone is available.

-Good news for Scott Schebler. The All-Star break comes at a good time. Hopefully with the next five days off, he’ll be ready to go come Friday.

X-rays were negative on Schebler’s shoulder. But he’s not likely to play Sunday. https://t.co/pBo9imNWVl #reds

-Here’s the lineup for the Futures game today. Hunter Greene and Taylor Trammell won’t start, but will likely play at some point, especially Greene.

Lineups and starting pitchers for today's Futures Game in D.C. It's Keller vs. Luzardo.

The Futures Game is the signature event of @AllStarGame break for the @BaseballAmerica crew. With these talented lineups it's easy to see why. pic.twitter.com/owsbQwRRT3

The Futures game will be played in DC this afternoon at 4:00 ET. If you get a chance, I highly recommend watching it. It’s a great way to watch players who will likely be playing at the major league level in the next couple of years. Many of the MLB stars now played in the Futures game once, including Joey Votto.

Joey Votto produced a sac fly and later homered off Clay Buchholz in the World team's 7-2 victory in 2007 at AT&T Park in San Francisco. pic.twitter.com/DTj7FuDvyl

Many of the players you won’t know now, but in a couple of years, you’ll hear a name of a player and say “I know that name. He played in the Futures game once.” In 2015, I went to the Futures game at GABP and it was a blast to watch. And now, I’m watching baseball games and recognizing players who I saw then, such as Michael Conforto, Lucas Giolito, Trevor Story, Ketel Marte, Blake Snell, Aaron Nola and Amir Garrett. And that list doesn’t include stars like Aaron Judge, Kyle Schwarber, and Ozzie Albies. The Futures game really is a great event. The only problem with it is that it’s played while MLB games are happening.