Among a poor overall pitching staff in 2017, Luis Castillo was one of the few bright spots. He pitched so well, in fact, that it was easy to forget he was a rookie who’d never even pitched in Triple-A. With his 97-mph fastball (onÃ‚Â average) and wicked secondary pitches, the sky was seemingly the limit for Castillo coming into 2018. He was poised to be the team’s next Johnny Cueto, the ace of a staff that could get back to the postseason.

The beginning of the season was a stark reminder that Castillo is just 25 years old and had 15 big-league starts under his belt coming into the year. In his first six starts, he posted an ugly 7.85 ERA, saw his strikeout rate drop to 18.3%, and watched his walk rate climb to 9.9%. His fastball, while still fast, was sitting around 95 instead of 97. But the biggest problem was where his pitches were located rather than how quickly they were reaching home plate.

Castillo’s fastball was blasted for an .821 slugging percentage and an average exit velocity of 92.6 mph. His sinker was nearly as bad, coming in at a .600 slugging percentage and an exit velocity of 90.0 mph. He allowed six home runs in those initial six starts, and five of them came on his two fastballs. As you can see below, his control of both pitches was erratic at best.

Here’s a look at his fastball command against both lefties and righties in his first six starts:

That’s a whole lot of mistakes over the middle of the plate. With the decrease in velocity, he wasn’t able to blow those pitches by hitters with as much regularity and both lefties (1.000 SLG) and righties (.643 SLG) had success against it.

Here’s a look at his sinker location through those first six outings:

The goal of the sinker is to get it down in the zone, and Castillo didn’t do that with consistency. His groundball rate on the pitch fell from 76.7% in 2017 to 55.9%, and — like the fastball — he didn’t have that extra oomph to blow it by batters when he missed up in the zone. His primary issue was retiring left-handers with the pitch, who slugged 1.000 on the pitch versus a manageable .364 SLG for righties.

Even Castillo’s nasty changeup wasn’t quite as effective. The swings and misses were there (30.7% whiff rate), but the weak contact was not. Batters averaged an 87.1 mph average exit velocity — up from 83.2 mph in 2017 — and slugged .390, up from a minuscule .198. Those numbers aren’t terrible by any means, but they demonstrate how off Castillo was in the month of April. His slider was still a tough pitch to hit (.094 SLG), but with more vertical drop, it was more clearly a ball to hitters and they stopped chasing it outside the strike zone as much.

That culminated in the worst outing of his major-league career on April 27 against the Twins. Castillo lasted only one inning and allowed five runs on six hits and two walks. If the Reds were off in the following days, Jim Riggleman said the team would’ve skipped Castillo’s turn in the rotation to give him a break and sort his mechanics out. The team didn’t have that luxury, however. Fortunately, pitching coach Danny Darwin noted a problem with Castillo’s release point — specifically that his arm angle had dropped.

From the Cincinnati Enquirer:

Ã¢â‚¬Å“WeÃ¢â‚¬â„¢re trying to get extension,Ã¢â‚¬Â Darwin said. Ã¢â‚¬Å“Teddy [Power] and I noticed that he was cutting everything short out front. He had a really good bullpen the other day, so weÃ¢â‚¬â„¢ll see what happens.Ã¢â‚¬Â

Since that adjustment was made, he’s looked more like the Castillo of 2017.

Over his last five outings, he’s put up a 2.83 ERA in 28 2/3 innings with a 26.3 K% and 7.6 BB%. He’s still been far from perfect, struggling to go further than six innings and walking five batters in a game on May 19. Home runs have continued to be a problem as well, as he’s allowed five more to put him at 11 for the year — matching his 2017 total in 32 fewer innings. But there are improvements to build from.

First, a look at the slight change in arm angle, which has allowed him to stay on top of the ball instead of the side, as Jim Riggleman noted in the Enquirer article linked above. 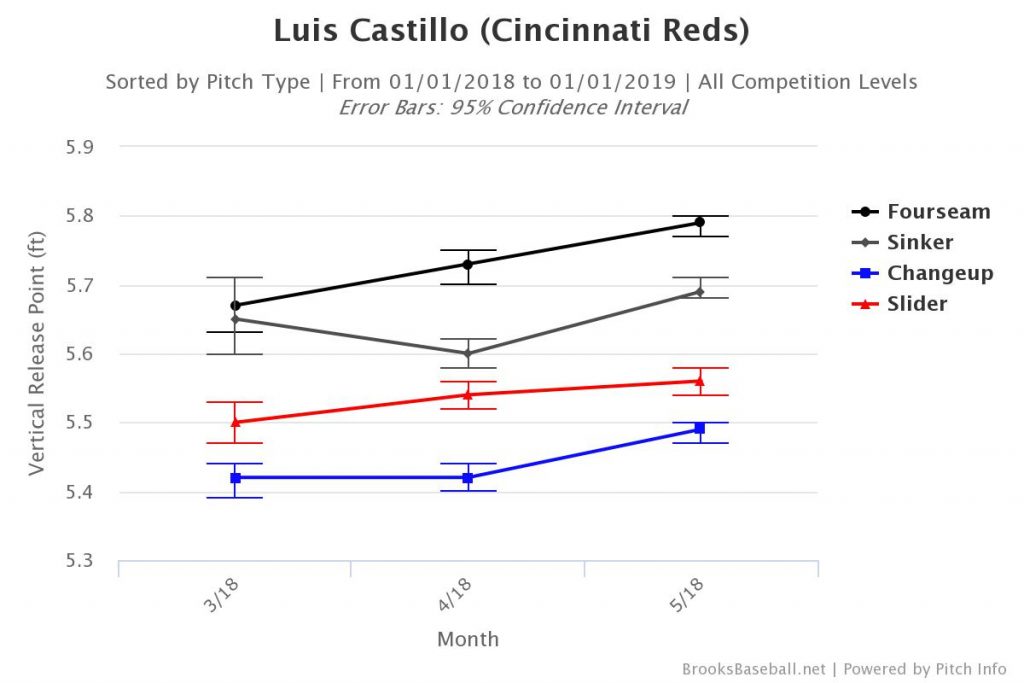 The biggest beneficiary of this change has been Castillo’s four-seamer. The pitch has held opposing hitters to a putrid .120 slugging percentage with zero home runs allowed since May 2, and neither lefties nor righties have found success against it. Its velocity is still down compared to 2017, but he’s getting more whiffs (12.1% vs. 7.7% in his first six starts), too. The change in arm angle seems to have made it easier for him to command the fastball, as illustrated here:

Castillo has been better able to hit the corners against batters on both sides of the plate, leaving him less susceptible to getting hit hard on pitches right down the can.

He still has some work to do against right-handed hitters, however. He’s missing over the middle of the plate to righties more often than you’d like to see, and he’s not having a ton of success on the outside part of the plate either unless he really paints the corner or misses the plate entirely. Ideally, he’ll start to go inside on right-handers a little more, where he’s had more success in his career. 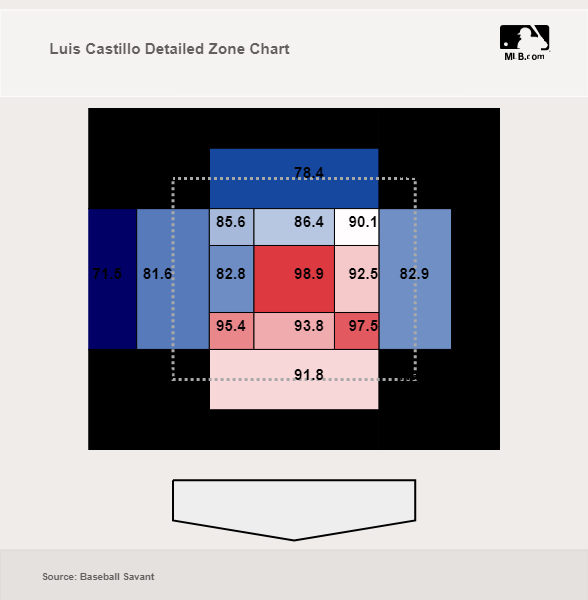 The slider has also seen an uptick in effectiveness since the Great Arm Angle Adjustment of 2018. Its whiff rate has jumped from 8.2% to 16.0%, in line with its 15.9% mark a year ago. Another factor beyond the release point is his vertical drop on the breaking ball. As The Athletic’s Eno Saris noted earlier in the year, Castillo seemed to be focusing on getting more drop on the pitch and it wasn’t working well. Although that makes the pitch look better, it can also make it easier for hitters to pick up and lay off.

One game aside, his vertical movement on the slider has dropped since raising his arm angle (in this graph, moving upward means less drop on the pitch): 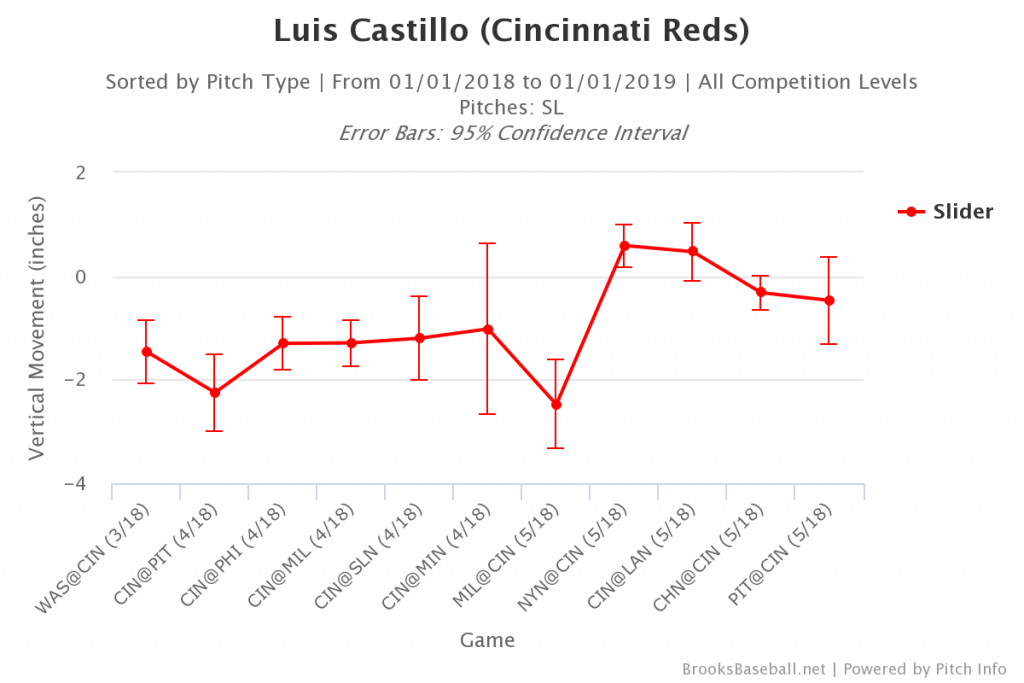 It’s made a noticeable difference thus far. In his four games since reducing the drop on his slider, the pitch has generated a combined 12 swings and misses. In the seven before that? Five total. The trade-off — at least so far — has been fewer groundballs on the pitch, but it hasn’t mattered much because the pitch has still allowed a .125 SLG on the year.

Castillo’s changeup continue to be an elite pitch at missing bats, ranking first in whiff rate (30.1%) in baseball by a wide margin. He’s still had some issues locating it from time to time, leading to three home runs allowed on the pitch (and two since the mechanical tweak), two more than he allowed on the pitch all of last year. So there’s still work to be done there, too.

The sinker, however, has continued to be a subpar pitch for Castillo despite the adjustment. He’s still not getting it down in the zone with consistency and it’s coming back to bite him, likely because his velocity is down and he can’t get away with the mistakes like he could last season. The offering has been hit even harder (.719 SLG) over his last five starts, with three of his five home runs allowed in the month of May coming on the pitch. On a positive note, however, the pitch is getting more ground balls (62.1%) than it did early in the season (55.9%), slowly creeping back up toward his elite 2017 rate (76.7%).

Clearly, correcting the flaw noticed by the coaching staff has helped Castillo get back on track to some extent. He’s still not his 2017 self with the diminished velocity and control that’s still erratic at times, but he’s heading in the right direction for the most part. Whether the 97-mph average fastball returns or not remains to be seen. If it doesn’t, continuing to find consistency with his command becomes even more imperative to fulfill the sky-high expectations he had coming into 2018.