What should’ve been a routine off-day in the middle of April turned into quite the eventful ordeal yesterday, as the Reds (3-15) fired manager Bryan Price and pitching coach Mack Jenkins after an abysmal start to the season. Today will mark the first game with former bench coach Jim Riggleman at the helm, and he’ll look to right the ship starting against the Cardinals (10-8) on the road at 8:15 p.m. ET.

The Reds, of course, are fresh off an embarrassing display against their division rival, suffering a four-game sweep at home last weekend. Riggleman is unlikely to make any sort of huge difference — the move to elevate him to interim manager was not much more than reshuffling the deck — but there’s almost nowhere else to go but up from here.

Brandon Finnegan made his first start of the season last Saturday against these same Cardinals and didn’t look particularly sharp. He lasted just 4 1/3 innings and gave up a run in all but one frame (five in total) in what was ultimately a 6-1 Reds loss. St. Louis hitters took Finnegan deep twice, and the usual control problems continued to plague him. He threw only 34.1 percent of his pitches in the strike zone (52 of his 91 pitches for strikes overall) and walked four on the day, including the first two batters of the game. While Finnegan did strike out four, he registered only six swings and misses, further indicating his stuff wasn’t near its best. He threw his changeup — unquestionably his best off-speed pitch — only eight times on the day.

Look out for the two Cs in his start tonight: control and changeup. When Finnegan has both, he looks like a pitcher who can stick in the starting rotation. When he doesn’t have either, well, things get dicey. 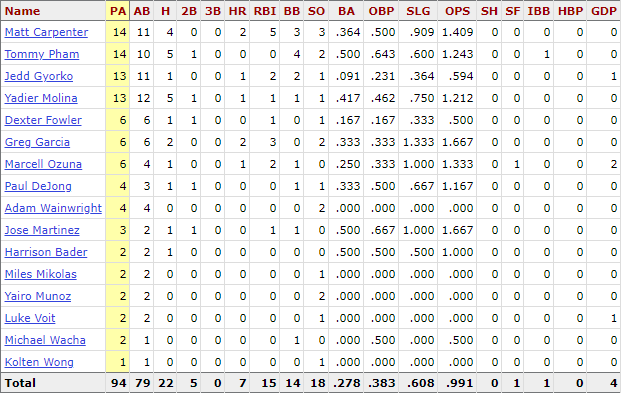 The Cardinals were hoping this would be the year Michael Wacha finally stays healthy and consistent. So far, only one of those things has happened. Although he holds a 2-1 record, the 2018 season has gotten off to a bumpy start for the 26-year-old, largely due to his control. Through three outings, the right-hander has walked 10 batters in 14 2/3 innings — including three against the Reds last Thursday — and hit the strike zone on only 43.7 percent of his pitches (his career average is 47.6 percent).

Along with control, the top concern for Wacha is his decreased fastball velocity, which sits at an average of 92.9 mph this season after averaging a career-best 95.1 mph in 2017. The uptick in velocity, paired with a personal-best strikeout rate of 22.5 percent last year, had many optimistic a breakout was coming for Wacha. Instead, his strikeout rate is down to 17.7 percent and his swinging-strike rate sits at a poor 7.6 percent. Who knows whether these trends will last — the unseasonably cold weather in the Midwest probably isn’t helping any pitcher — but Wacha certainly looks hittable right now, as the Reds proved last week. 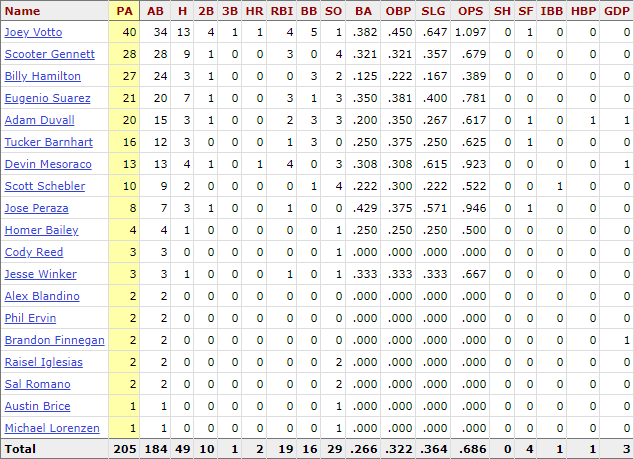 Scott Schebler isn’t in the lineup, but he is in the clubhouse. As of this writing, no roster move has been announced.

Schebler is here in the clubhouse. No roster has been announced. #reds

UPDATE: Schebler has been activated. Cody Reed is heading to Louisville, presumably to start. The Reds now have a full five-man bench.

The deck was so stacked against Bryan Price that @MoEgger1530 says the #Reds did him a favor by firing him. https://t.co/OySiuv9ins

The search for a new #Reds' manager will take some time, but @ctrent has some names that could surface as the process progresses. https://t.co/HfDYgErpEs

This is the earliest the Reds have ever fired a manager into a season. Previous fewest games was Tony Perez in 1993 at 44. Reds were 20-24 when Perez was fired. Davey Johnson took over and went 53-65 the rest of the way.

The Reds’ Slump Has Extended to Joey Votto https://t.co/5FbWEP75DO

Some better news to report in the minor leagues:

Hunter Greene struck out three in 2.1 scoreless innings last night with his fastball clocking as high as 101 mph. The game was delayed by rain in the top of the 3rd and Greene did not return once play resumed. #RedsMiLB @DragonsBaseball pic.twitter.com/jkMBzr1AEK

Need some good news, #Reds fans? @dougdirt24 has plenty to report about prospect Tyler Stephenson tearing it up with the Advanced-A @daytonatortugas. https://t.co/cd3YAdBrSf

A bonus stat of the day:

Reds bullpen ERA minus Gallardo, Rainey, and Weiss is 2.62.

Stat of the Day

While the starting pitching has kept the Reds in games lately, the offense continues to stay ice cold. After breaking out for 10 runs in Monday’s win against the Brewers, the bats put up a goose egg in the following two games and come into tonight on a 19-inning scoreless streak. If the club is going turn it around, it clearly needs better performances across the board, but it starts with the offense.Ã‚Â Will Price’s firing make much of a difference? Probably not. There’s little doubt the Reds are better than their 3-15 record indicates, though, so maybe the move was the spark needed to get the team playing better. We’ll see tonight as the Riggleman era begins.