The Cincinnati Reds (2-8) will try to avoid being swept in the city of brotherly love by the Philadelphia Phillies (5-5) tonight at 7:05 PM. The Reds bullpen spoiled a terrific start last night by Homer Bailey. The Reds have continued their worst start since 1995, when the Reds started 2-8 that season also. The Reds haven’t started 2-9 since 1993.

Tonight’s starting pitching matchup will feature two pitchers that have never faced a single hitter on their opponent at the major league level.Ã‚Â Luis Castillo‘s first two starts of 2018 have been pretty mediocre. Castillo has done a fairly good job throwing strikes, but he has missed his location at times and given up hard contact as a result. 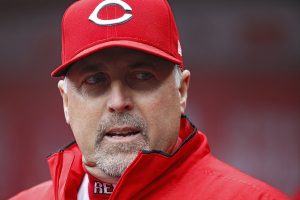 Bryan PriceÃ‚Â made a couple really head-scratching moves (or non-moves) last night. The Reds were up 1-0 going into the bottom of the 7th. The Phillies had a left-handed batter due up, and it was the guy (Nick Williams) who hit the winning home run the night before. Price decided to go with Jared Hughes, a right-handed pitcher. Nick Williams of course doubled off the wall. Hughes was able to get two outs, and faced LHB J.P. Crawford. He is 2 for 26 in his career off left-handed pitchers, and had a .598 OPS vs LHP in the minors last season. Price stuck with Hughes despite having two lefties in his bullpen. Crawford of course singled to tie the game.

Possibly even worse than pitching Hughes in the 7th inning, Price elected to go withÃ‚Â Tanner RaineyÃ‚Â in the 8th inning of a 1-1 game against the top of the Phillies lineup. It was the MLB debut for Rainey. He would end up giving up a grand slam. Meanwhile, Raisel Iglesias has thrown a grand total of 11 pitches over the last 7 days, and hasn’t pitched since Saturday. Price has previously gone out of his way to say that he would be less conventional with his bullpen management, and promised to use Iglesias creatively and for multiple innings at times. If Bryan Price wants to consistently go down without using his best reliever, his job can go down too.

It hasn’t been pleasant times for Reds country over the first two weeks of the baseball season. Many of the fans (myself included) who have been very patient during this long rebuild are beginning to lose patience, especially with Bryan Price. We all know the roster is not exactly where the Reds would like it with DeSclafani, Finnegan, Hernandez, Lorenzen, and Suarez all on the DL, but the Reds do have enough talent not to be 2-8. This train needs to start rolling in the right direction soon. Go Reds!