Winning is fun. The Reds (2-5) should try that more often, huh? After a rough first week of the season, the club finally broke through against the Pirates (6-2) last night to erase the taste of a particularly ugly loss on Friday. They’ll try to turn it into a winning streak today as they wrap up their four-game road series this afternoon at 1:35 p.m. ET.

No Reds pitcher has impressed more in the early going than Tyler Mahle. The 23-year-old dominated a strong Cubs lineup on Monday, throwing six frames of no-run, one-hit baseball and striking out a career-high seven batters. True to his calling card, Mahle painted the corners of the strike zone all day long, with his tailing fastball resulting in five called strike threes. His other two strikeouts were also on his four-seamer, getting Cubs hitters to swing through them up in the zone.

Mahle also used three pitches against the Cubs rather than the fastball-slider combination he mostly relied on in the big leagues last year. The changeup was his pitch of choice 12 times on Monday after throwing it only 26 times in four starts last year. While he had a little bit of troubling locating it, he did get a couple of swings and misses. If his secondary pitches keep coming along, Mahle is going to be special.

With last year behind him, Taillon put up a fantastic start in the Pirates home opener on Monday. The right-hander tossed 5 1/3 innings and allowed just two runs on four hits. He also tied a career-high with nine strikeouts and didn’t walk anybody. If he can maintain his improved strikeout rate and get his walk rate back to elite levels rather than simply above average, this kid is going to give the Reds fits for years to come. 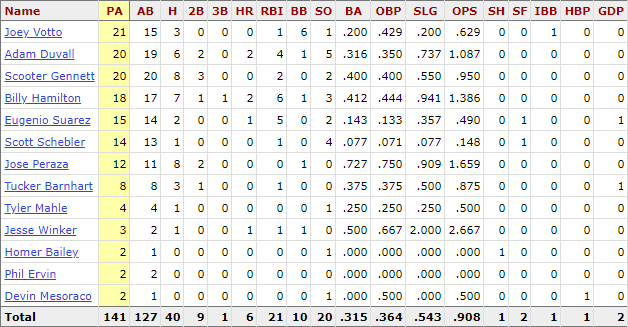 TJ Friedl homered and stole a base in a Daytona Tortugas win on Saturday evening.https://t.co/jyp2Iqc87i pic.twitter.com/KqsUvZ4sub

The #Reds needed something good to happen after a rough start to the season. Eugenio Suárez delivered on Saturday with a big game. @ctrent captures the mood. https://t.co/GcP8mSCFSN

Stat of the Day

This year, only five pitchers have generated more swings and misses in a game than Luis Castillo (19) did on March 31 against the Nationals. (Side note: Max Scherzer, with 23 whiffs against the Reds on Opening Day, is the league leader.)

Here’s a look at the Reds’ single-game whiff leaders the last decade:

Today’s pitching matchup should be a fun one to watch as two talented young arms square off against each other. The Reds’ offense finally got some momentum going last night that will hopefully carry over into today’s game. They’re facing a tough pitcher, but if they can get to the Pirates’ bullpen early again, you have to like their chances of doing damage. After the games on Thursday and Friday, coming away with a series split against Pittsburgh would almost feel like a win.