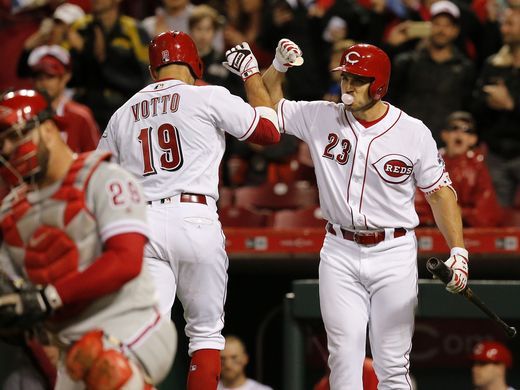 The first place Cincinnati Reds (1-1) will go for a series win to kick off the 2017 season this afternoon against the Philadelphia Phillies (1-1) at 12:35. The Reds won 2-0 last night, courtesy of a brilliant start by Brandon Finnegan. The Reds will turn to Rookie Davis today, who is making his MLB debut.

The following stats are 2017 ZiPS projections

Reds #17 prospect Rookie DavisÃ‚Â (according to MLB Pipleline) will make his MLB debut this afternoon for the Reds. Our good friend Doug Gray wrote about what to expect from Davis last week. I encourage you to read the entire piece, which also highlights his background.

Rookie Davis didnÃ¢â‚¬â„¢t seem to enter the public conversation for the rotation early on in the spring. Part of that was probably due to the fact that his 2016 season left plenty of question marks on his resume. He also only had a small amount of time in Louisville and he didnÃ¢â‚¬â„¢t do well there. There were early signs though that 2017 Rookie Davis was a different guy than 2016 Rookie Davis. In his first start he was throwing 93-95 MPH, which is a range he would rarely touch in 2016.

It wasnÃ¢â‚¬â„¢t just the increased velocity though. Rookie Davis also added a slider to his arsenal. The early reports on it have been outstanding. When it comes to the numbers that he put up, they stacked up well with the others that were contending for a spot in the rotation. In 15.2 innings he posted a 4.02 ERA with three walks and 17 strikeouts. He did what Bryan Price loves to see and thatÃ¢â‚¬â„¢s pound the strikezone.

This is where things get tough. Rookie Davis has never truly been a top end starting pitching prospect. Prior to 2016 he had shown good fastball velocity, control of the strikezone and posted good numbers. Scouts however would note that his secondary stuff was average and that he lacked that out pitch at the next level. At the minor league level we never saw that secondary offering show up. This spring, as noted above, the newly developed slider may very well be that pitch. It certainly was in the spring, but the sample size was very small, too.

Rookie Davis is now throwing a 4-seam, 2-seam, change up, slider and curveball. The fastball velocity we touched on, but the slider and change up were both in the 86-88 MPH range and his curveball works in the low 80Ã¢â‚¬â„¢s. HeÃ¢â‚¬â„¢s got enough offerings to keep hitters guessing, and heÃ¢â‚¬â„¢s been a strike thrower for his entire career. If he can continue to throw strikes in the Major Leagues he will probably be solid at worst. If his slider truly has given him that out pitch it could be real interesting to see exactly how good he could become as a guy who could both miss bats and keep a low walk rate.

Clay BuchholzÃ‚Â has quite a bit more experience than Davis, but he will be making his Phillies debut today. Buchholz had pitched his entire 10-year MLB career in Boston with the Red Sox before being traded to the Phillies in December. He is far removed from the player who finished 6th in the AL Cy Young voting in 2010. Buchholz is expected to be an average starter in 2016.

This will be the first time Clay Buchholz has ever pitched against the Cincinnati Reds. Buchholz had a 6.65 ERA and 1.66 WHIP in 21.2 IP this spring.

It will be exciting to see what Rookie Davis has today. I don’t think anyone expects Davis to be a mainstay in this rotation for the entire season, but there is a lot to like about him. He has excellent command for a young pitcher. It would also be really nice to see the Reds head off to St. Louis with a series win to start the year. The Reds offense is due for a big game. Go Reds!