Today, Major League Baseball celebrates Roberto Clemente Day. The career-long Pirate was a 15-time all-star before his life was tragically cut short on December 31, 1972 while delivering supplies to earthquake victims in Nicaragua.

On Dec. 23, 1972, Nicaragua suffered a devastating natural disaster-an earthquake. It left incredible damage throughout the capital of Managua. In only eight days, ClementeÃ¢â‚¬â„¢s impassioned pleas throughout Puerto Rico resulted in donations of $150,000, numerous boxes of food, clothing and medical needs. But Clemente had heard reports that the donations were not being distributed to those who needed them the most. On the evening of Dec. 31, Clemente boarded a plane filled with relief supplies, but the overloaded plane would never reach its final destination. It plunged into the ocean off the shores of Puerto Rico.

This wasn’t a one time act of kindness from Clemente. Clemente’s story at the Baseball Hall of Fame website summarizes a lifetime full of compassion and charitable work.

MICHAEL LORENZEN NOMINATED FOR CLEMENTE AWARD
As mentioned yesterday, Michael Lorenzen was nominated for MLB’s annual Clemente Award for his philanthropic work in the Cincinnati area. Lorenzen’s connection to Clemente’s legacy actually goes a little deeper than an award nomination.

This past offseason, while on a trip to Puerto Rico to promote Christianity in baseball, Lorenzen had the opportunity to meet the Clemente family, including his widow, Vera. He spent time at their home, enjoyed some meals and immersed himself in the Clemente story. The experience was profound enough for Lorenzen that he asked the Reds to change his uniform from No. 50 to No. 21, to honor Clemente.

You can #VoteLorenzen to MLB’s official social media accounts, @MLB on Twitter and Facebook.com/MLB.Ã‚Â 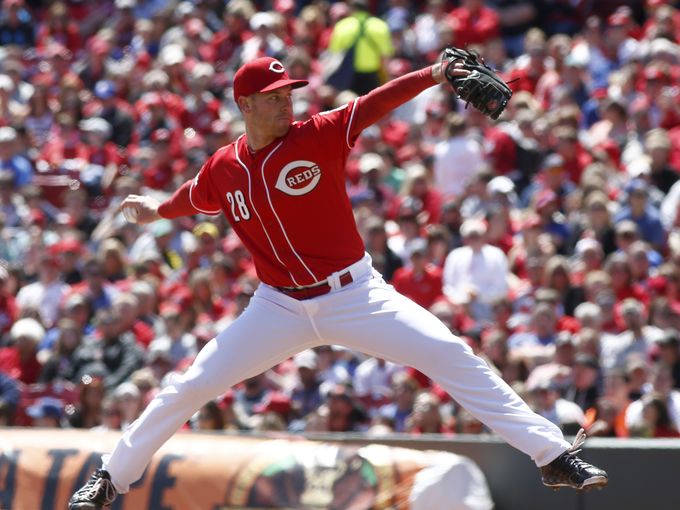 Fresh off his visit from the Cincinnati Zoo, Noah Syndergaard takes the ball for his 27th start of the season. The Mets ace and team WAR leader is coming off three consecutive games of seven innings or more and two runs or less. The Reds scored three runs off him in 6.2 innings back in April.

While his stats are above the league average across the board, what puts him among the best in all of baseball is his control. DeSclafani has walked only 5.3 percent of the hitters heÃ¢â‚¬â„¢s faced this season, which puts him in elite company. Among the 125 pitchers who have thrown 100 or more innings this season, that ranks 12th, better than the likes of Noah Syndergaard, Chris Sale, David Price, Jacob deGrom, Max Scherzer, and Madison Bumgarner.

STARTING LINEUPS
Eugenio Suarez is back at third base after yesterday’s day off. Jose Peraza moves in from center to shortstop while Tyler Holt gets the start in centerfield.

Signing of Guiterrez is now official. Here's what I wrote yesterday on latest Cuban pitcher to join #reds https://t.co/sLS0wnZKqJ

NL WILDCARD STANDINGS
The Mets are trying to leapfrog the Cardinals into the 2nd wildcard spot, and have really put distance between themselves, the Pirates and the Marlins. This pitcure was a five team race just a few days ago, but the Cardinals have won three games in a row, the Mets have won four in a row, while the Marlins and Pirates are on five-game and eight-game losing streaks, respectively.

CONCLUDING THOUGHTS
I don’t want to see the Cardinals in the playoffs again, but I don’t want see the Reds lose again to the Mets. They’ve lost 14 in a row to this team, dating back to 2014. Let’s beat the Mets, then let the Mets leave town and win out the rest of the season.