Baseball is fun when the hometown wins, and it is especially fun when you beat the first place team in another division. The Reds won yesterday on the strength of Adam DuvallÃ¢â‚¬â„¢s 15th homer. Now, in the midst of a four game winning streak, your Cincinnati Reds (21-35) break out the brooms for the series sweep against the Washington Generals (33-23) today at Great American Ballpark. 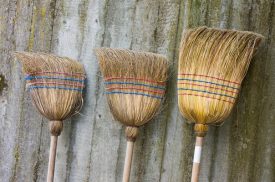 After doing the impossible against Stephen Strasburg yesterday, the Reds seem to have an even bigger hill to climb as they send out Jon Moscot. Moscot started the season well, all things considered, before going on the DL with shoulder issues. He came back at the end of May, surrendering 7 runs to the Rockies in two innings. LetÃ¢â‚¬â„¢s hope he was just shaking the Dust off and will bring his best game today.

The Nationals counter with Tanner Roark who, not counting two disastrous outings against Miami, has been quite effective most of the season. Roark is to the Nationals what Simon was supposed to be to the Reds: an innings eater. Thus far, the only difference is Roark has been largely effective. If the RedsÃ¢â‚¬â„¢ offensive output over the last few days can continue and they can get to him early, the Reds might yet sweep the series and bring the winning streak to 5.

The Reds called up Kyle Waldrop and optioned Dayan Diaz shortly before the game yesterday. It could be that theyÃ¢â‚¬â„¢re just looking for more options from the bench, but there might also be an OF trade on the horizon. Keep your eyes open and your ears to the ground.

Bryce Harper appears to be in a mini-slump. HeÃ¢â‚¬â„¢s only 1 for 7 this series and 5 for his last 35. HeÃ¢â‚¬â„¢s also only a lifetime .160 hitter in Great American Ballpark. If anyone has his number, it seems the Reds do. Of course, now that IÃ¢â‚¬â„¢ve said that, heÃ¢â‚¬â„¢ll probably go 10 for 10 with 11 homeruns today. Because IÃ¢â‚¬â„¢m superstitious like that.

Win or lose today, itÃ¢â‚¬â„¢s been a good series. Much better than what most of us expected. RealityÃ¢â€žÂ¢ will likely come back to bite us sooner or later. Until then, enjoy the success Reds fan. And break out your brooms. ItÃ¢â‚¬â„¢s time to SWEEP!