Would ya look at that? The Cincinnati Reds (19-35), having won 3 of the last 4 games against the offensive juggernaut known as the Colorado Rockies, return home to face the Washington Nationals (33-21) for a three-game weekend series.

Three out of four in a row for series victory. #Awesometastic! The Reds havenÃ¢â‚¬â„¢t done that since Woodrow Wilson was president (or something like that). They keep this up (and you just KNOW they will, right?), theyÃ¢â‚¬â„¢ll finish the season with 100 victories and will storm their way through the playoffs to an eventual World Series victory!

Brandon Finnegan begins again after giving up 4 runs in six innings against the Brewers on Sunday. HeÃ¢â‚¬â„¢s been spotty of late, averaging about three earned runs and 5 or 6 innings a game since the beginning of May. He had an awesome outing against the Dodgers a few weeks ago that had our spirits lifted, but then his disastrous showing against the Brewers brought us all crashing down to the cold, hard floor of Reality.

The Nationals counter with Gio Gonzales, the only pitcher in the majors whoÃ¢â‚¬â„¢s first name sounds like a new piece of iTech. iGio! After dominating early on in the season, the Gonzales Train appears to have come off the rails a bit withÃ‚Â big, recentÃ‚Â losses to the New York Mehts and St. Louis Bleeps. LetÃ¢â‚¬â„¢s hope the Good Guys can continue this trend and send iGioÃ¢â‚¬â„¢s ERA well north of 4.00 after this contest is over. 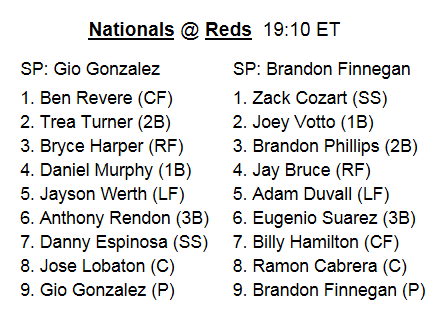 This is the first time Dusty has been to GABP this season, so will everyone who plans to be at the game tonight make sure to scream loudly and let him know how much you love and miss him?Ã‚Â kthx.

If he wants to trade us Daniel Murphy for Jay Bruce or Adam Duvall, go ahead and let him know weÃ¢â‚¬â„¢ll take that as well. Bruce, after all, is an established veteran heÃ¢â‚¬â„¢s coached in the past and, as we all know, Dusty:Veterans::Dogs:YouGetTheIdea.

Since the NBA finals will most likely take over the next few days of sports coverage (and since, as we previously stated, The Reds are about to go on an epic torrent of wins, despite the fact that theyÃ¢â‚¬â„¢re playing the third-best team in all of baseball), C-Trent Gildenstern should probably have a good time on Twitter. For a few days at least.

I know it canÃ¢â‚¬â„¢t last. I know the darkness will fall again and weÃ¢â‚¬â„¢ll spend the rest of the season hoping against hope that the Reds lose less than 110 games. But right now, in this moment, theyÃ¢â‚¬â„¢re on a small roll. So just let me enjoy it, okay?