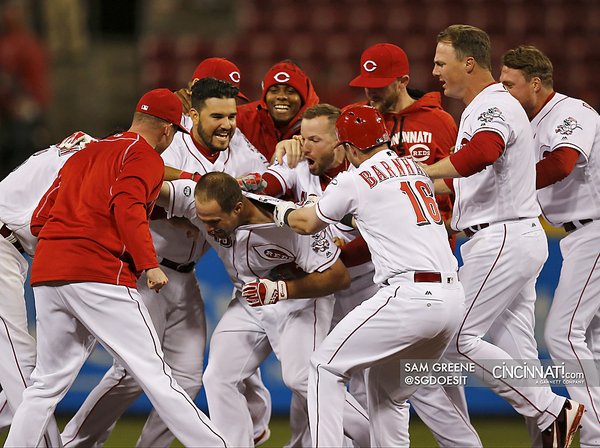 The first two games couldn’t have gone much better for the Reds. The Reds got their second comeback win last night, as Scott Schebler hit a walk-off double to give the Reds a 3-2 win. The Reds will look for a sweep of the Phillies today, and they will turn to their #2 prospect, Robert Stephenson. He will be making his big league debut for the Reds.

Reds #2 prospect (#35 overall in the MLB) Robert Stephenson will make his major league debut today. It has been confirmed that he will only be making the start today, and then he’ll be going down to Louisville. It should be exciting for Reds fans to get a look at what their future ace will look like.

Charlie Morton is a 32 year old pitcher who is going into his 9th big league season. Morton has had some success in the big leagues, most recently between 2013-14 with the Pirates. Over those two seasons, Morton had a 3.52 ERA/3.67 FIP in 46 starts. Morton has dealt with injuries throughout his career, which has really kept him from being a really solid starter.

Brandon Phillips is still out of the Reds lineup with a stomach bug. Mesoraco, Cozart, and Hamilton all get today off, but don’t be alarmed. Price said before the season that he was going to easeÃ‚Â all three of theseÃ‚Â players into the season. Jordan Pacheco makes his Reds debut today.

You couldn’t ask for much better starts from Raisel Iglesias and Brandon Finnegan to start the year. The two pitchers combined for 16 strikeouts in 12 innings, while only allowing 1 walk.

The Reds bullpen was terrific inÃ‚Â the first two games. Last night, Caleb Cotham (acquired in the Chapman deal) pitched two perfect innings, and Blake Wood pitched a scoreless ninth inning. On the other side, the Reds have won both games against the Phillies bullpen.

The Reds have had two big hits so far in 2016. Both hits have come from players who had struggled mightily earlier in the game. On Opening Day, Joey Votto had struck out in all three trips to the plate before he came up in the 8th inning. Votto then hit a 2-RBI single to break a 2-2 tie.

Michael Lorenzen would be on the verge of throwing, but he now has mono.

From our friends at @EliasSports: Prior to last night's win, #Reds had lost their last 102 home games when trailing in the 9th or later…

The Reds have played 2 games, and they are 2.5 games ahead of the Cardinals in the standings. Mike Leake struggled in his St. Louis debut last night (4.1 IP, 7 H, 4 R, 3 BB, 1 K), and the Pirates swept the Cardinals. The Cubs begin a 4-game series in Arizona tonight. The Brewers, Pirates, and Cardinals are all off today.

How cool would it be for the Reds to start off 2016 with a sweep? The first two games have been a lot of fun to watch. It will also be exciting to see Robert Stephenson pitch this afternoon, and get a glimpse into the Reds future. Go Reds!

Sports are more fun when you have no expectations for your team.