We have finally made it to the end. The Cincinnati Reds (64-97) ended their 13-game losing streak last night, and will look to finish the season with a series win against the postseason bound Pittsburgh Pirates (97-64). The Reds would love to end a miserable 2015 season on a high note.

The Pirates are still playing for home field advantage in the wild card game. The Pirates need either a win or a Cubs loss to play the NL Wild Card game in Pittsburgh on Wednesday night.

Josh Smith has really struggled in six big league starts, and the majority of his struggles come from walking way too many batters. He has walked 21 batters in 28.2 innings. The positive from Smith’s few starts in 2015 is his above average K/9 (8.16).

J.A. Happ has been a huge trade-deadline addition for the Pirates. Happ came over from the Mariners, and has 2.04 ERA and 2.18 FIP in 10 starts for the Pirates. In Happ’s last start, he pitched six shutout innings against the Cardinals, allowing just 1 hit, 0 walks, and 4 strikeouts.

The Reds will send their regulars out for the season finale. This could be Brayan Pena’s final game as a Red. Pena has been a really good guy in his time in Cincy, and great with the fans.

The Pirates will start the game with their normal lineup. I am sure manager Clint Hurdle will keep his starters in with home field advantage for the wild card game on the line.

Votto’s streak comes to an end

Joey Votto’s incredible 48-game on-base streak came to a tragic end last night. His streak ends with him tied with Pete Rose (1978) for the Reds longest consecutive on-base streak in Reds history. Votto’s streak was really the only thing that made watching the Reds this September somewhat worth it.

You probably already heard, but Walt Jocketty announced yesterday that Bryan Price will officially be returning as the Reds manager in 2016. It is certainly a controversial move, as many Reds fans are upset (and probably rightfully so). I however offer a different view.

I am certainly not a fan of Bryan Price. I have heavily criticized many of his moves on this site. That being said, I don’t see the value in firing Price. The Reds are not going to be competing with the top 3 in the NL Central in 2016. The Reds will have a ton of young pitchers (literally, a ton). The Reds could value from Price helping develop these young pitchers.

Price has done some good things too. He batted Votto second, he batted Hamilton ninth. That shows that he is a little open minded in his thinking, which is a good thing. In addition to that, you are paying Price to manage the Reds if he actually manages or not. I don’t see why it would be a good idea to waste that money during a lost season.

@Nicholaspkirby He's a placeholder until they have the right players to be in contention. No point hiring big money manager.

Let's be honest: the greatest manager who ever lived couldn't make the Reds a 3rd place team next year, so why not Price?

It's not like there's somebody who's a realistic upgrade at manager either. It's either going to be a retread, or Price all over again 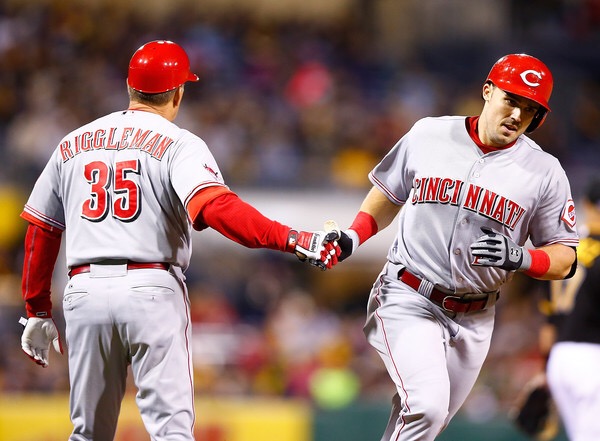 All of the games in the MLB start at just about the same time today (3:05 or 3:10). That means while the Reds are playing, there is a crazy race going on for the AL West and the AL Wild Card. Let’s get up to speed:

1. If the Rangers win: Rangers win the AL West, the Astros get the 2nd wild card spot, and the Angels are eliminated (regardless if the Astros win or not)

2. If the Rangers lose and the Astros win: Rangers and Astros play a Game 163 tomorrow (the Angels would be eliminated). The winner wins the AL West and moves on to the ALDS. The loser play at the Yankees in the AL Wild Card game.

3. If the Rangers lose and the Astros lose: Rangers win the AL West. The Astros and Angels would play a Game 163 tomorrow, and the winner would move on to the AL Wild Card game.

Max Scherzer struck out 17 batters, and threw his second no-hitter of 2015 last night for the Nationals (video). It has certainly been a disappointing season for the Nationals, but Max has been incredible. He took a no-hitter into the 9th inning on Monday against the Reds too. Scherzer’s 104 Game Score was the second best in a nine-inning game in MLB history. The only one better was Kerry Wood’s 20 K, 1-hitter.

It has been a miserable season for the ole’ Redlegs. For those of you who have stuck with us here at RN during this rough season, we thank you. It really can only go up from here, right?

A special thanks to Greg Dafler and Wesley Jenkins for doing the bulk of these game previews in 2015. They really took the Game Thread and made it something terrific this season. As for me, it was a pleasure filling in here and there. I’ll give you more thoughts in the Game Recap later tonight. Go Reds!