With the loss last night at the hands of the mighty Indians’ offense, the Reds (40-48) have officially lost the Ohio Cup and now have no reason left to fight in 2015. Sure, this series is tied and the Reds could try and win that by winning today, but without the most coveted trophy in baseball on the line, might as well make like Nemo and tank.

STARTING PITCHERS
All stats are 2015 actuals:

Another Johnny Beisbol start, another day full of worry of injury and diminished trade value. Cueto didn’t fare too well his last time out the day before the All Star break; he allowed three earned runs in 5.0 innings and threw a cooler in the dugout when he was pulled for a pinch hitter. Not that it should affect the Reds’ season much, but Cueto is expected to regress sightly in the second half with an xFIP of 3.17.

For the Indians is Carlos Carrasco in his first full year of starting for the club. Carrasco was picked by many to have a breakout year coming into 2015, but his traditional numbers have fallen flat because of the quite terrible Indians’ defense. In reality, Carrasco has dominated at a Cueto-like level, posting a 2.73 FIP and 2.7 WAR, matching Cueto’s own value. In his last time out before the break, Carrasco took a no decision after 7.0 innings of two runs on six hits with seven strikeouts.

STARTING LINEUPS
Todd Frazier gets a day off as Ivan De Jesus moves up in the order to spell him in today’s Reds’ lineup:

FRAZIER VS. VOTTO VS. BRUCE
(Click the image to enlarge…via Fangraphs) 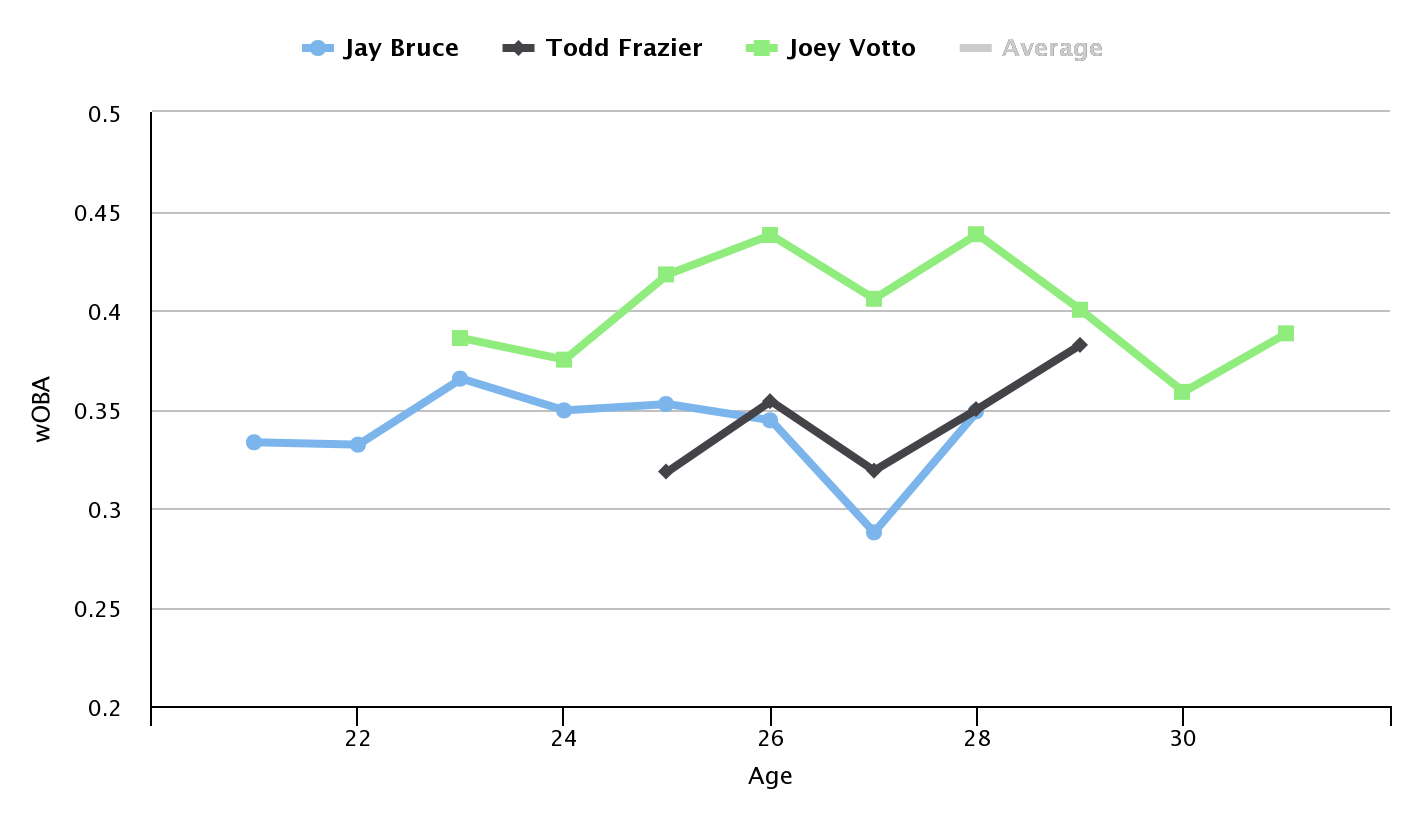 Two of these players are untouchable in the Reds’ eyes, the other has been actively shopped all season if reports are to be believed.If wOBA is to be accepted as the best offensive catch-all stat, this chart alone should prove either both Bruce and Frazier should be shopped, or neither should be. Draw your own conclusions as to individual value, but it seems pretty clear that Votto is still “elite” whereas Frazier and Bruce are two very good players on about equal footing with each other.

TICKETS AND TRAVEL
Find the best prices and support Redleg Nation by purchasing your Reds tickets – home or away – through TiqIQ. No added service fee from TiqIQ. Hipmunk.com for Cincinnati flights that can be reserved through most major airline carriers. Hotels in Cincinnati can be booked too, with rates starting from $53 near the airport or the ballpark.

CONCLUDING THOUGHTS
No trade rumor news means a slow day in Reds’ country. I guess a game will still be played, but in a season where everything’s a wash and the wins don’t matter, why annoy yourself by getting invested. Casual baseball watching is the new mantra for 2015. Keeping our collective sanity is the goal.