One rookie starting pitcher thrown, two more to go. After last night’s excellent start by Disco DeSclafani, Bryan Price and the Reds (20-27) turn to Raisel Iglesias for game two. The Reds are in dire need of a winning streak right now, and what better way to start one than with the three young guns that should anchor the rotation in the years to come?

STARTING PITCHERS
All stats are 2015 actuals:

Both starting pitchers today are interesting because their FIP’s show that they have both outpitched their ERA’s. However, they digress when it comes to xFIP (expected Fielding Independent Pitching), which puts Gio Gonzalez at a 3.20 and Raisel Iglesias at 4.44.

In his last start, Iglesias only lasted three innings after running up his pitch count to 84. While not pitching particularly poorly, Iglesias had a tough time finishing off batters, which lead to the high pitch count. For what it’s worth, Iglesias has been over a hundred points better (.182 vs. .286) against righties as opposed to lefties.

Gio Gonzalez comes into this game off of a quality start against the Phillies. In that game, he went 6.1 innings, allowing one run on seven hits and a walk with seven strikeouts. Before that start thought, Gonzalez’s previous two were ugly: 10.0 IP, 15 H, 11 ER, 4 BB, 4 K. The lefty has been sturdy for the Nats’ rotation for the most part and has seemed to reinvent himself into a groundball pitcher. Through nine starts, his GB% of 57.9% is ten points higher than his career average (47.2%) and his career FB% (33.2%) has been nearly cut in half this season (18.9%).

*UPDATE: Bryce Harper was scratched from the lineup with a sore back.

BAD BLOOD A-BREWIN’
Or not, if you listen to Joey Votto. When asked about the words between him and Bryce Harper last night, Votto gave the same wry smile Reds fans have become accustomed to and said:

I don’t remember. I don’t what you’re talking about. I really like him as a hitter. What a great player. I bet on Bryce. Man, he’s doing great.

The Nationals scratched Bryce Harper from the lineup today with a sore back. So things could get very interesting the rest of the weekend.

Bryce Harper was scratched from tonight's lineup with a sore back. #Nats

THE FUTURE OF NOW
Last year, after pitching in the College World Series in early June, Brandon Finnegan was drafted in the first round and subsequently found himself pitching in the World Series just four short months later. While a very rare feat indeed, the start of the NCAA baseball regionals yesterday gives us fans the first glimpse of which college players could crack the big leagues sooner rather than later.

The Reds have the 11th pick in June 10th’s draft and have been rumored to pick a number of college guys. Here are some names to watch as the NCAA playoffs unfold:

—Andrew Benintendi: Bennie Baseball as some call him, the Arkansas outfielder was just named the SEC player of the year. Benintendi led the nation in slugging (.771) and led the SEC in average (.415) and homers (17). Not to mention that Benintendi is an Ohio boy who is the state’s all-time leader in hits. Where to watch: The Oklahoma State regional

—Jon Harris: The Missouri State righty has been rumored to go anywhere from 8 to 15 in the first round, but he could be a great fit for the Reds system. 6’4″ and 190 pounds, the pitcher has a fastball sitting between 92-94, which could add life as Harris fills out his frame. Where to watch: The Missouri State regional

—Carson Fulmer: If he falls to 11th, Fulmer would likely be snatched up by the Reds. The Vanderbilt righty has long been projected as a big league closer due to his size and fiery temperament, but this season he proved he could stay as a starter, winning the SEC Pitcher of the Year. Fulmer led the league in ERA (1.51), wins (11), and strikeouts (132). Where to watch: The Nashville Regional

OTHER NEWS AND NOTES 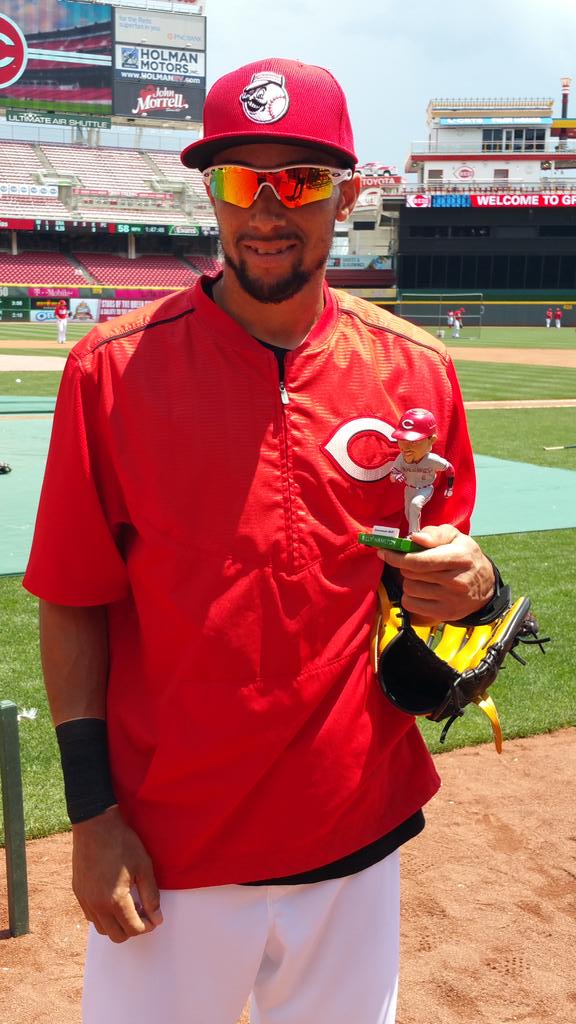 Reds MLB.com writer Mark Sheldon concluded that Bryan Price wanted to use Chapman last night in the 8th inning, but didn’t feel like he could go multiple innings.

While the Reds win on Friday worked out in how the bullpen was used with J.J. Hoover getting the eighth-inning strikeout with the bases loaded to escape the jam, the seemingly everyday question of Ã¢â‚¬Å“why not Chapman?Ã¢â‚¬Â Ã‚Â still came. Bryan Price revealed Saturday that Chapman wasnÃ¢â‚¬â„¢t available for more than an inning.

Ã¢â‚¬Å“We knew going into it that it wasnÃ¢â‚¬â„¢t going to be a multiple-inning situation for Chappy,Ã¢â‚¬Â Price said. Ã¢â‚¬Å“IÃ¢â‚¬â„¢ll leave it at that just from what we knew going into yesterdayÃ¢â‚¬â„¢s game on where he was. Under different circumstances, it would have been Chapman in that situation. We knew he was going to be up once, and in once yesterday. I knew that going into the game or that would have had a different flavor to it in the eighth for sure.Ã¢â‚¬Â

The Nationals put Stephen Strasburg on the 15-day DL today. Strasburg had to leave in the second inning of last nights game with an injury.

The #Nats have recalled RHP Taylor Hill and placed RHP Stephen Strasburg on the 15-day DL with neck tightness: http://t.co/TzaRHbuhIw

There are some scattered thunderstorms in the forecast today. There is a chance of this game being delayed.

Rain has stopped, and grounds crew put the cover back on tarp roll. Sun is even out. #trafficandweathertogether. #notreallytraffic #reds 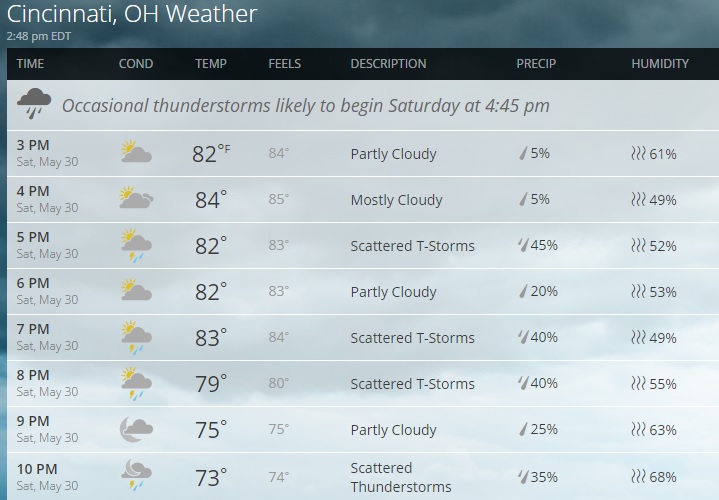 CONCLUDING THOUGHTS
Today is once again the day of my birth, and as such, all I want is a Reds’ win and a series victory. Everything else is just icing on the metaphorical and literal cake.